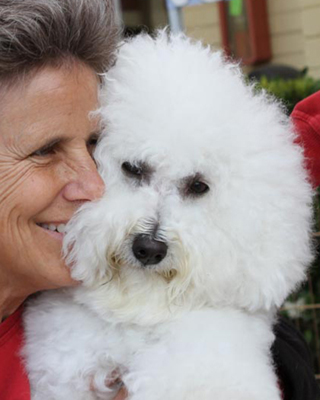 Born March 20, 2009, Woody was rescued from a family that had an “unexpected litter”. They had not expected their female bichon to come into heat at her age, but, surprise, the enevitable happened. The owner was adamant about finding perfect homes for the puppies and she surrendered her last two to Bichon FurKids Rescue. The Gibb family fostered the two brothers and before long, it was clear that Woody was going to remain with the Gibb pack forever.

The biggest “baby” of the Gibb pack, Woody was a gentle giant. He was a 21 pound bichon and gave us a GREAT BIG BICHON to love! Katie was smitten with Woody and he with her. Our biggest and our littlest bichons…they were best pals.

On Thanksgiving morning, 2016, Woody passed away from an unexpected and instantaneous internal rupture of some kind. He was gone and an instant, but will forever be in our hearts. RIP our gentle giant.