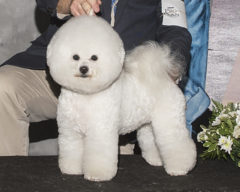 Lucie began showing with her mommy, Jewel Weien, late in 2016.  Jewel had not planned to have a “show dog” and she wasn’t sure if showing was going to be Lucie’s cup of tea, so initially Jewel and Lucie just hung out with the show folks for fun.  As Lucie matured it became clear that she had the potential to follow in her mommy Holly and daddy Wills footsteps, so off she went to “finishing school” where she quickly became a favorite of her handler, Allan Chambers.  Lucie finished her AKC Championship with 4 Majors and was 16 months old.  Before returning home for a little hiatus she also picked up a Major toward her Grand Champion title.  In early 2018 Lucie completed her International Champion title and her OFA health testing.  In 2018 Lucie took her turn at the whelping box and delivered her first litter. We were not surprised to discover what a wonderful mommy she was…just as sweet and nurturing as her mommy, Holly.

~ Deb, Linda and Jewel and Jeff