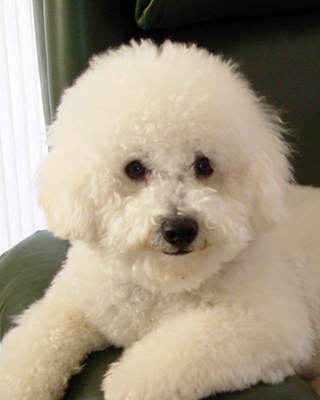 Born approximately December 18,2007, Chipper was a stray found in Riverside County and turned in to animal control services. He was one sick puppy, with 2 ear infections, kennel cough and pneumonia. The shelter staff did not have the means to try to keep him alive so they called Bichon FurKids. We immediately transported him to a local veterinary hospital and within a week, he was able to go to foster care. Chipper had a full recovery and became a foster ambassador for Bichon FurKids, helping to foster and guide over 30 rescued bichons in 2009.

Unfortunately, in July of 2009, at only 18 months old, Chipper was diagnosed with some immune system deficiencies. Once again, Bichon FurKids came to his rescue and he survived a near death experience. However, due to his condition he was not adoptable and he officially became the newest member of the Gibb pack. Chipper’s road to recovery wasn’t pretty. The drugs made him gain weight and made his muscles atrophy. He wobbled to maintain his balance, his coat was virtually gone and he was covered with warts. In spite of his “look”, his health was stable and he was the happiest bichon boy you will ever meet. We could no longer foster bichons since they would put Chipper at risk. Instead, Chipper became the “big brother” to the litters of puppies we produced. Chipper just loved the puppies and was sad if there wasn’t a litter in the house.

In April of 2019 Chipper quietly crossed over the Rainbow Bridge due to complications of his lifelong autoimmune battle. We will cherish all he taught us about this wonderful breed. He was an amazing bichon.