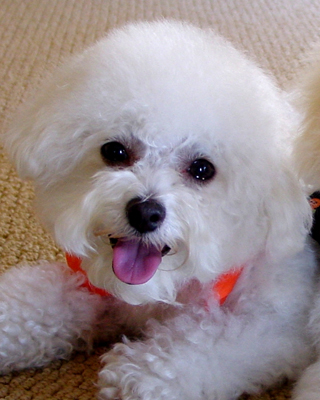 Born on August 7, 2004, Pixie was rescued when an owner surrendered her. The owner was a breeder who had had her final litter and was retiring from breeding. She had kept Pixie in the hope that her teenage daughter would gain interest in breeding and use Pixie as her breeding bitch. Her daughter showed waning interest and the decision was made to surrender Pixie.

Form may years Pixie was the alpha of the Gibb bichons. She will be known for being an exceptional judge of temperament when fostering rescued bichons. She would let us know what she thought of a new rescue within minutes of meeting them. She set a great example for each new bichon we have rescued and teaches them the “house rules”.

Pixie lived a very healthy life and passed away in 2021 of “old age”.  She never had any medical issues but in her last year she lost weight, some vision, but mostly she suffered from doggie dementia and became afraid of her surroundings.  When we finally let her go she was almost 18 years old.  RIP sweet girl.  You will always be our first bichon.